The artist in her Brooklyn studio. Photo by James Orlando. 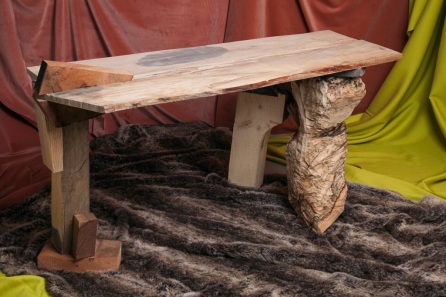 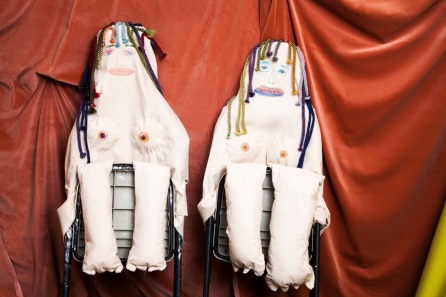 Nina Johnson is pleased to announce Sweetie Honey Pie Angel Cake, an exhibition of new work by artist Katie Stout, opening with a public reception on December 4th (7-9pm), and remaining on view until January 6th.

Across a range of design objects, the Brooklyn-based Stout has become one of the most talked about designers of her generation. Whether working within the functional logic of lighting, seating, or shelving, or with mirrored or textile surfaces, Stout recasts the domestic world in her own, singular way—the effects being both absurd and abject, playful and sinister.

Stout’s recent work has engaged notions of coming of age. The objects and environments both allude to physical and emotional maturation, and to the spaces in which that maturation takes place: a tween bedroom, perhaps, or a nightclub. This exhibition takes a lurid approach to what is normally considered generative architecture. The bright, happy spaces of the home gives way to something seedy and darkly sensual. The result is plush and declasse, not unlike the parlor of a brothel.

Screens and mirrors will both divide and multiply the interior into different spaces of potential. Wallpaper patterned with nudes taunt and tempt the viewer. Within this panorama, Stout’s furniture is haunted by the period pieces she took as inspiration, and, through embroidered bodies, the people that could have once used them. A group of chairs surround the void where a table should be. Each anthropomorphizes into a female form. One breastfeeds. The uncanny union of body and furniture speaks to the social power of domestic spaces, the power to, quite literally, shape the people we become. By holding up a smoked mirror to our familiar spaces, Stout replaces the known, communal world with one of individual fantasy.

About Katie Stout
Katie Stout is a graduate of RISD, her work has been exhibited at the MCA Santa Barbara, Design Miami, Miami, Design Miami/Basel, Salon 94, Karma, and R20th. She has been featured in T Magazine, Forbes,New York Magazine, W Magazine, Cultured, and various other publications. Katie had her first solo exhibition with Gallery Diet in 2015.

About Nina Johnson Gallery
Nina Johnson is a contemporary art space in Miami, Florida. Opened as Gallery Diet in 2007, the gallery has produced exhibitions by emerging and established artists from around the world.